Mustache styles, like beard styles, have come and gone in infamy and popularity throughout recorded history because of the famous men who sported them. One thing’s for sure: No matter how many times we ask, “Are mustaches cool again?” mustaches (or moustaches) are timeless. Here are the different mustaches popularized by historical figures.

Kickass Mustache Styles for the Ages

The chevron mustache is a full, robust mustache which looks like an inverted letter V. In order to grow one, you will need to let the hair grow thick without covering your mouth and upper lip. There’s still some beard grooming, pruning, and cultivation involved compared to the walrus mustache.

The comedian’s bushy eyebrows, eyeglasses, nose, and mustache disguise has become so iconic that it has become a novelty item called Groucho glasses. Though Groucho painted his goofy mustache on using greasepaint during his early career, he grew a real one when he started his own radio quiz show You Bet Your Life in his later years.

The Dali isn’t for the faint of heart. You can think of it as a handlebar mustache gone batshit crazy. To get a Dali mustache, you will need to shave a portion of the hair directly under your nose and then grow the ends long. Those who sport this facial hair style apply wax on it daily to keep its eccentric appearance. How about that for extreme beard styling?

No one wore it better than the originator himself: Salvador Dali. Dali broke rules in art and painted loopy, deranged images in his paintings, like melting clocks on branches. He once said that his mustache was the only thing serious about him.

If you refer to a fist fight as fisticuffs and you love to watch a game of cricket while drinking a cup of tea, then the English is the ‘stache for you. Similar to the handlebar, you grow your mo out robustly. Then you will need to part it smack dab in the middle while waxing the edges and pulling them on each side until they’re pointing straight. Men who cultivate English mustaches shave the hair on the corners of their mouth to make these ‘staches pop. 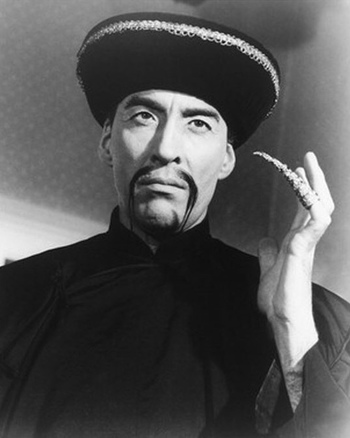 You can tell the Fu Manchu apart from other mustaches because two “tendrils” springing from the corners of the mouth and reaching down past the jawline. It is commonly associated with movie villains.

Iconic movie and pulp fiction villain Dr. Fu Manchu takes the mantle since the ‘stache obviously originates from him. He is the criminal mastermind in the novels of Sax Rohmer and his dastardly plots involve the use of clandestine societies and poison to get his way. Pretty bad-ass.

The handlebar mustache is not really just one mustache, but a class which includes the English, the Imperial, and the Walrus. Their common trait is the mustache must grow beyond the upper lip. Men who cultivate handlebars spend a lot of time grooming, as this particular ‘stache can grow wild and unkempt if not carefully tended.

Handlebars award men with a Wild West appeal and no one exemplifies this more than Buffalo Bill Cody. He was a bison hunter, a scout for the army, a showman, and a legend who feted the wonders of the frontier to American and European audiences. 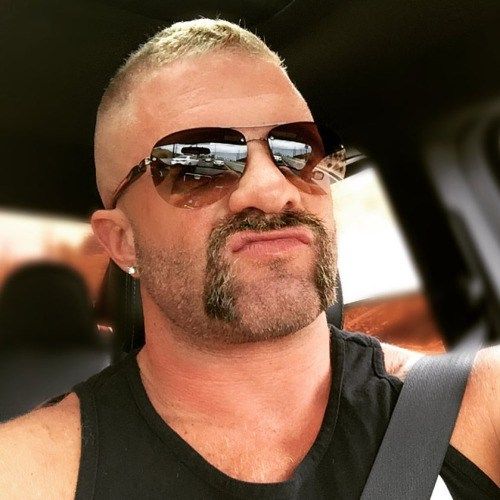 Largely associated with bikers, the horseshoe mustache looks like an inverted U. The stache is grown with sharp, vertical extensions starting from the corner of the lips, and then goes down to the jaws.

Well, let me tell you something, brother. The man with the most recognizable horseshoe mustache out there is none other than Hulk Hogan. People consider Hulk Hogan the greatest professional wrestler of all time. Let the Hulkamaniacs run wild!

You can give yourself the bonafide look of an aristocrat or simply make yourself look comical when you sport an imperial mustache. It’s a look no one can easily pull off as the mustache is allowed to grow quite long. As long as the mustache will allow its ends to be waxed and pointed upwards to the cheekbones, it looks like an Imperial.

This mustache gained its imperial moniker from none other than Kaiser Wilhelm, the last emperor of Germany. According to his biographers, the Kaiser was as bombastic as his mustache was.

The lampshade mustache can be difficult to pin down from the pyramid and the painter’s brush mustache. But you can tell it apart because its adopters shave the upper portions of the stache going inward so it’ll sport a soft curve. The mustache does appear like it has the shape of a lampshade.

The lampshade mustache sits on the upper lip of the once-king of Hollywood, Clark Gable. They say this facial hair style is underrated but if you’re as devil-may-care and debonair as Mr. Gable, you just don’t give a damn.

Ron Swanson is a man of the times and the paintbrush mustache perfectly underscores his manly ways. Swanson is the breakout character of Parks and Recreation and receives admiration for his jazz saxophone skills as much as his woodworking.

Who Wore This Mustache Best: Prince

Prince’s pencil-thin ‘stache is part and parcel of his artistic mystique. Though he may no longer with us The Artist Formerly Known as Prince will always make the doves cry when someone plays Purple Rain.

This mustache is the father of the lampshade, despite the latter being more popular. What makes the pyramid different is its wide base, which narrows until it reaches the nose. It looks like a triangle.

General Charles de Gaulle was the leader of the French Resistance in World War II and the Prime Minister of France in 1958. As you can guess, this mustache will give its wearer a fiercely intelligent look.

The toothbrush mustache gained notoriety because a certain German leader sported it. But this mustache should also be popular because Charlie Chaplin wore the same 'stache.

One can tell a walrus mustache from the rest because men who wear this allow the whiskers to grow past the upper lip. Yes, it looks like the whiskers walruses have and that’s how the mustache gained its name.

Walrus mustaches hint at a larger-than-life personality and this description fits Teddy Roosevelt perfectly. This president learned to wrestle at a young age to overcome his weak constitution and grew up to become a great soldier and statesman.

BuzzFeedBlue has a feature on American Facial Hair Throughout History if you want to learn more about the hirsute fashions of the past:

And there you have it, a list of the most iconic mustaches in history. If you’re feeling stumped as to what style you’ll carry above your upper lip, you only have to refer to this article and groom accordingly. Not only will you look good, you’ll also be in the company of the famous men who sported these facial hair styles.

What do you think about this list? Is there a mustache style we missed? Do you think you’ll be wearing one of these above your upper lip in the future? Share your answers in the comments section below.

Up Next: 10 Cool Beards On Television 7 Best Styles of the Soul Patch